Norman Bluhm was born in Chicago and began his studies in architecture at the age of fifteen with Mies van der Rohe at the Illinois Institute of Technology. He served in the United States Air Force from 1941-1945 and saw action over Europe as a bomber pilot. After the war he returned to Europe studied in Florence at the Academia de Belle Arte before moving to Paris in 1947 to continue his education at the Ecole des Beaux-Arts and the Académie de la Grand Chaumiere. He remained in Paris until 1956 as part of a loose confederation of expatriate American painters that included Sam Francis, Al Held, Conrad Marca-Relli, Joan Mitchell and Milton Resnick among others.

After returning to New York he began showing with Leo Castelli, where he had exhibitions in 1957, 1959 and 1960. The Cedar Tavern became a favorite gathering place for Bluhm, were he met other painters and writers, including Frank O’Hara, Franz Kline, Willem de Kooning and Jackson Pollock. Among the work of this noted group were the 26 Bluhm-O’Hara spontaneous poem paintings, composed in 1960 in Bluhm’s studio in the old TIffany Glass building.

The Corcoran Gallery in Washington, CD exhibited Bluhm’s work in his first museum show in 1969 and he is now recognized as one of the leading figures of Post-War abstraction. 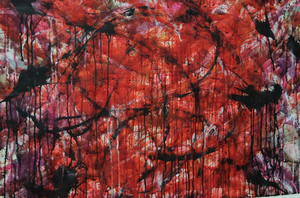 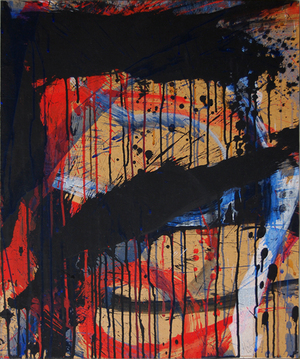