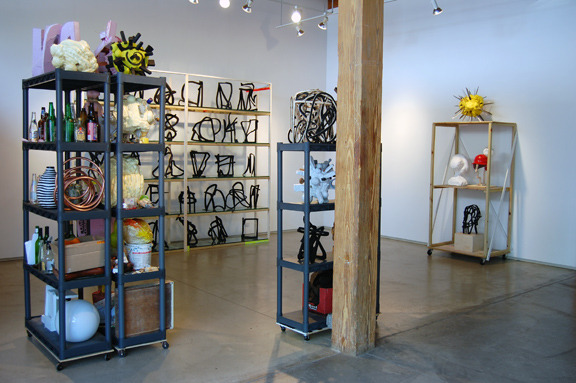 The mine(d) museum is a gathering of recent studio activity. The work continues previous interests in urban space, history, and cultural forces. Recent gestures add a turn toward the body and mental places. The show contains numerous portrait forms, which concern themselves with psychic states and playful cover-up. Several of the plaster sculptures actually cover toys. The radial sculptures, with projecting nerves, are the brain studies. Invisibles Systems, is the largest shelving unit, which holds about 30 small sculptural structures. The forms mimic cellular movement and are arranged to appear like a developing language.

Playful forms are mixed with dark matter and heavier material. Functioning like a skin, surface materials hold, or pretend to hold, the liquid center. There is a pressure building inside, like a carbonated beverage, this head could pop! The air must be released slowly. And the artist has concerned himself with air, his own, and that of others. “Airheads” are the personalities among us who take flight, often disengaged, or not so connected to the expected. Sometimes they are the dummies. Sometimes they are the inflated personalities with all the answers leading us all astray. We all participate in the air show. Take a deep breath.

Who are we anyway? Let’s begin the brain studies. (So many directions to pursue, so little funding for the work. Mistakes will be made). The brain starts in the sky, above the clouds where it’s dark. Well, probably not. More accurate might be a start in the sea, with the fish, with a tail or a fin, and gill slits, surrounded by liquid and bubbles. The morphology toward the ape is complex and mysterious. The systems appear invisible. The language is symbolic.