Ben Herr was born in 1935 in Lancaster, PA. In the 1950’s he attended the Philadelphia Museum School of Art on a full scholarship. There he met artists Franz Kline, Robert Motherwell, Mercedes Carles Matter, Herbert Matter, and Melville Price. Under Price’s tutelage he was introduced to the work of Willem de Kooning, Jackson Pollock and Adolph Gottlieb. From 1953-1957 Herr was very active in the Philadelphia arts scene, exhibiting at the Philadelphia Print Club, Cheltenham Art Gallery, Fleischer Art Memorial, Philadelphia Art Alliance, Philadelphia Museum of Art and the Philadelphia Museum School’s annual art exhibitions. Eventually Herr found the pace of city life hectic and moved back to Lancaster where he lives and works today. Much of his work references the Amish farmlands he is surrounded by in Pennsylvania. Herr’s work is characterized by an extreme use of overall space on a canvas along with several layers of collage. Herr also created sculptures and his collages border on the sculptural incorporating cloth, thumbtacks and burlap. Herr was given a retrospective at the Susquehanna Art Museum in 2009-2010. His solo exhibit at McCormick Gallery in December 2014 through January 2015 was followed by concurrent retrospective exhibits at the Demuth Museum and the Lancaster Museum of Art, and inclusion in a group show at Franklin and Marshall College and a group exhibit of abstract expressionist art in Jim Thorpe, PA. Herr finished 2015 with a solo exhibit at West Chester University. Through 2015 Herr has corresponded with The Willem de Kooning Foundation in New York and the Hendler Foundation in Maine, providing information they were missing about de Kooning’s activities in Philadelphia including his interactions with the Hendler Gallery in the 1950’s. 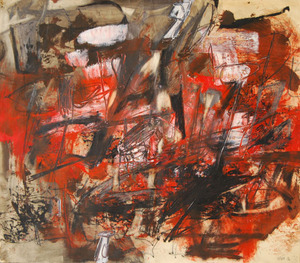