Originally from Sarasota, Florida, Budd became a member of the Abstract Expressionist movement in New York City and the Hamptons through the 1950s. By 1960 Budd became disillusioned with New York and the direction painters were beginning to turn. He was especially wary of the new Pop Art movement. In reaction he moved to France where he spent most of the next decade developing a more introspective and reflective manner of working. Much of his work from this period became richly textured and monochro- matic. In Paris he worked with Galerie Stadler and collaborated with the expatriate American writer William S. Burroughs.

After his return to the States in the early 70s Budd embarked on a busy schedule that included shows at Tibor de Nagy and Max Hutchinson and a teaching position at the School of the Visual Arts. He also went on to win a Guggenheim Fellowship, a National Endowment for the Arts grant and a Peggy Guggenheim Award. Budd died in Sarasota in 1991 after a long illness. Catalog is available. 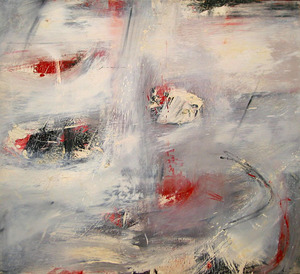