It’s 1954, and twenty-four year old Audrey Hepburn is about to become a star. Fifty-one year old Joseph Cornell is smitten. Hepburn is cast opposite Mel Ferrer in the title role for the Broadway adaptation of the 1938 play, Ondine, by Jean Giraudoux. The play won the Drama Critic’s award for Best Play and garnered the young star a Best Actress Tony. None of this was missed by the socially uneasy Cornell in his Utopian Parkway home. The story is a fairy tale of Hans and Ondine. He is a knight-errant, sent on a forest quest by his betrothed where he meets Hepburn’s water sprite character, Ondine, and they fall in love — a love that could never be — a spirit and a mortal. Cornell wanted to express his admiration for the actress, a declaration that would also meet with rejection.

Deborah Soloman wrote of this episode in her 1997 book on Cornell: "Utopia Parkway, the Life and Work of Joseph Cornell"...

“Cornell, of course, was already well acquainted with the play. The original production staged in Paris in 1939, had alerted him to another Ondine — Fanny Cerrito, the Romantic ballerina who had danced the role of the sea siren a hundred years earlier. Now, in June, Cornell read the Giraudoux play in the back yard of Utopia Parkway, taking to his wooden armchair amid the ‘hush of early morning,’…. He felt newly captivated by the tale, a love story about a pair of opposites and the impossibility of union between mortal and spirit — a theme that echoed his own relationship with the long-departed Cerrito… Before June was out, Cornell made a new box in tribute to [Ondine], Owl for Ondine, in which a paper cutout of a blank-faced owl perches amid a woodsy, bark-encrusted setting. Owls, he explained to friends, were once a good luck symbol for actresses… Eager to present her with a token of his admiration, Cornell had his boxed owl delivered to her at the 46th Street Theater. He hoped that she would be pleased to own it. But Hepburn didn’t know what to make of this most unconventional gift, and Cornell, according to his friends, was ‘deeply hurt’ when she had the box returned to his home.” 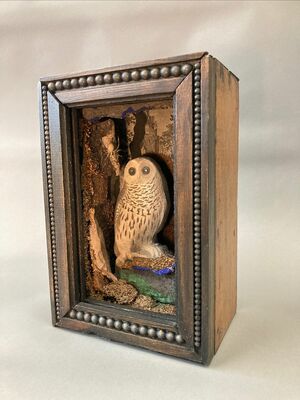 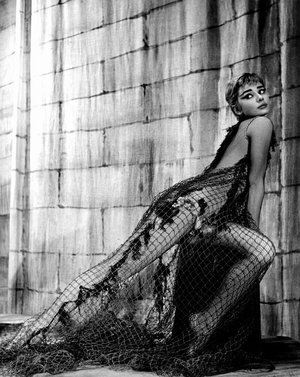 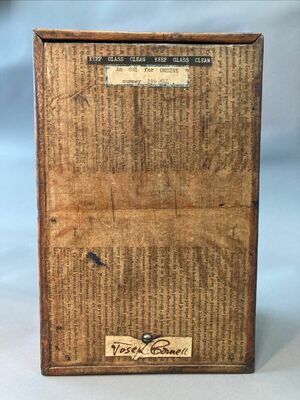