Lynne Mapp Drexler was born in Newport News, Virginia in 1928. Drexler began her study of art as a child, painting landscapes by the tender age of eight. In the late 1950s, after attending the College of William and Mary in Virginia, she immersed herself in Abstract Expressionism, studying with Hans Hofmann in both his New York and Provincetown schools. From there she went on to graduate study at Hunter College in New York City with Robert Motherwell. In her early work Drexler focused on color and composition, eventually reconciling her two interests — landscape and abstraction — in her late work of the 1980s and ‘90s. But it was in the 1950s that she set her foundation—a synthesis of Post-Impressionist landscape painting and post-war painterly abstraction. The results are something not familiar to most students of the period and her crisp, colorful brushwork allows the artist to sing with a completely original voice.

In fact, classical music was an important part of her art. When she lived in New York she regularly attended concerts at Carnegie Hall where she would make sketches while she was in the audience. Her vibrant surfaces are both complex and painterly but with a flatness akin to something found in the background of a Gustav Klimt work.

A sea-change in her work began after marraiage to the painter John Hultberg, whom she met at a dance at the Artist's Club. After they married in 1961 the couple began summering on remote Monhehgan Island off the Maine coast where she had the opportunity to work and sketch outdoors. Back in New York during the winter these sketchers were reimaginged into luxurious and colorful abstracted landscapes. Drexler's affinity for nature became intimately intertwined into her work. The artist finally moved permanently to the island where she lived the last 16 years of her life, dying there in 1999. 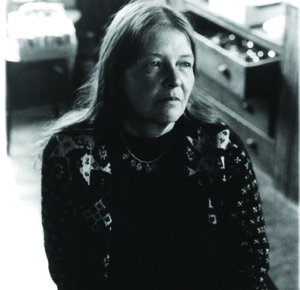 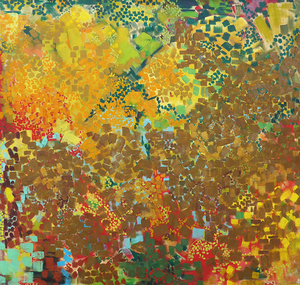