Our current show, Janice Biala: Paintings 1952 - 1962, is open by appointment! Please email tom@thomasmccormick.com to schedule a visit. Best days to catch us are Tuesday - Thursday! A catalog of the show is available on the Publications page.

Vivian Springford was born in Milwaukee, Wisconsin, and educated at the Spence School in New York City, and then the Art Students League. Born to a prominent family (her father was the former president and chairman of the board of Sevel, Inc, an early maker of refrigerators), she was pictured in The New York Times “Debutantes of the Winter Season in New York” in 1932.

Originally a portrait artist, she illustrated Albert Carr’s 1938 book Juggernaut with portraits of twenty political dictators from the Napoleanic era to the early twentieth century. She was championed in the late 1950s by Howard DeVree, the New York Times art critic, and Harold Rosenberg helped Springford get her first show at Great Jones Gallery in 1960. ?The show generated much excitement and was filmed in the movie “Bowl of Cherries”, in the film library of the Museum of Modern Art. Prominent collectors such as Leon Mnuchin purchased paintings from the exhibition.

Springford shared studio space with the Asian American artist Walasse Ting for ten years, and helped him with the translations of his poetry. Through her association with Ting, Springford developed close contacts with artists such as Pierre Alechinsky, Sam Francis and Karel Appel. Springford wrote “My painting is my own small plot of energy, in terms of color and movement, in the universal whole.” Springford also had a solo show at Preston Gallery in NYC in 1963, but became a reclusive artist after that, only showing in a few group exhibitions at the request of fellow artists and friends. She otherwise refused to sell or promote her own works. She worked in her New York studio through the mid 1980s until macular degeneration rendered her blind.

When Vivian Springford died in 2003, Gary Snyder Gallery presented a memorial show that was well received. As the history of Abstract Expressionism continues to be explored and defined, Vivian Springford is emerging as an important figure, who developed a sophisticated and original stain style of painting. She is included in the catalog for the important 2016 Denver Art Museum exhibition of Women Abstract Expressionists. 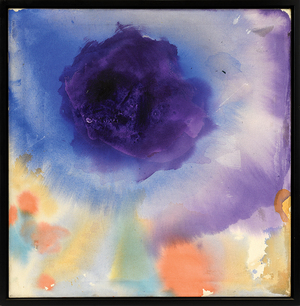