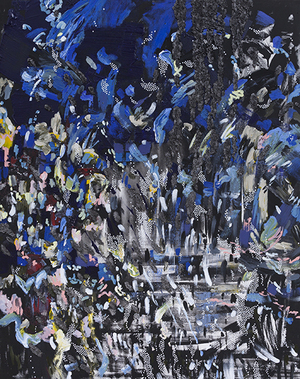 An exhibition of works by Pooja Pittie
Reception: Saturday, May 4, 5-7pm

“...the astronomer cannot prevent himself from seeing the moon larger at its rising than some time afterwards, although he is not deceived by this illusion.” Immanuel Kant, 1781

Pooja Pittie thinks deeply about painting, and even more about the physical act of painting. Her art, visually rich and aesthetically satisfying, presents layers of meaning both for her and the viewer. She reads voraciously, and her erudition is immediately apparent after even a brief encounter. Her library is as rich as her palette; she is inspired by the writings of ancient philosophers Seneca and Marcus Aurelius, as well as classic children’s books such as Alice in Wonderland by Lewis Carroll and James and the Giant Peach by Roald Dahl. Perhaps it is the open frontier of possibility proffered in these fairy tales that captivate her. No obstacle is too large to stop her from creating –– even her disability of muscular dystrophy.

Her recent series of work, Moon Illusion, represents a transition and natural outcome of her previous paintings. These featured nearly frenetic horror vacui, along with an astounding persistence in the methodical application of dots. Now, more frequent pauses of paint on the canvas signal the artist’s reflection of time and cognizance of the physical process of creation. Pittie’s trademark dots, congeries of opaque, effervescent, free-floating forms, still populate her canvas, however they reside alongside new artistic motifs that enrich her compositions. Though reduced, the dots maintain their visual and metaphysical power nonetheless. Her new paintings are a celebration of color as before, but each work is more directed in palette, more discerning. Horizontally-inclined, wide gestural brushstrokes glide on the surface. Counterbalancing these are long vertical drips of the same color. The drips introduce the perception of time — past, present, suspended, and future. Her paintings are displays of activity and suspension thereof. They initiate an enriching visual dialogue between the painting, viewer, and artist. Her new series is a manifesto of where she has traveled emotionally and physically, and thus a poetic and visual meditation on destiny.

Pittie embellishes this series with a new visual trope: a palpable energy implied by her rapid, wide application of gestural brushwork. Thus, each work insinuates varying physical activity. The effect is both movement and solidity, in juxtaposition to her transitory drips. Though thoroughly her own artistic vision, Moon Illusion draws inspiration from past artistic trends, as expected from an artist rooted in tradition and erudition. Emerging underneath her creations is the Pointillism of George Seurat; the gestural expressions of Willem De Kooning; and the drip paintings heralded by Jackson Pollock. In this coalescence of art historical past and the present, Pittie demonstrates we never escape our past, but those who have the capacity draw and reflect upon it to advance to an unparalleled level of creativity.

Born and raised in India, Pooja Pittie lives and works in Chicago. Her journey to become an artist was circuitous, as she began in the world of finance, earning an MBA from the University of Chicago Booth School of Business. For several years, she pursued a successful career in business and entrepreneurship—a clear outlet for her innate creativity. But she has always been a gifted artist, drawing sedulously from childhood. Her paintings have been exhibited at venues such as Expo Chicago and Art Miami. She is represented by the McCormick Gallery in Chicago.