Open by appointment or catch us by chance Tuesday-Thursday 10ish to 3ish! email gallery@thomasmccormick.com to schedule. Or view the show on our exhibitions page.

We have a new catalog on the work of Mary Abbott available on our publications page! 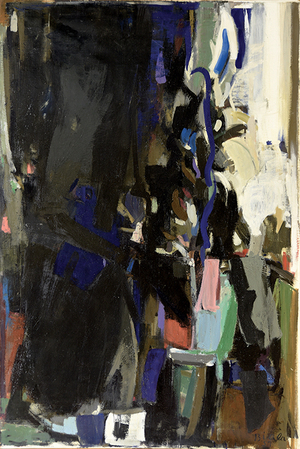 McCormick Gallery is pleased to present the exhibition Biala: Intimacy & Exile-Painting 1952-1962. An important figure of historic scale, the painter known simply as Biala had a career that stretched over eight decades and was heralded from Paris to New York. On view are paintings defined by a decade where the artist expanded upon her established style inspired by School of Paris painters like Bonnard, Matisse and Braque, and broadened by the community of loft-living artists in downtown New York that included Willem de Kooning. Critic Michael Brenson aptly described her as “a blend of intimacy and exile.”

Janice Biala was born Schenehaia, Tworkovsky in 1903 in a small village tucked alongside the River Biala in what is now southeast Poland. She immigrated to New York with her older brother Yakov in 1913. Yakov would later become the painter Jack Tworkov, a founding member of the New York School.

In the early 1920s, Biala hitchhiked her way to Provincetown, MA, to study with the painter Edwin Dickinson. As she established herself in New York, she changed her name at the suggestion of William Zorach from Janice Tworkov to simply Biala. On a fateful trip to Paris in 1930, he met and fell in love with the English Novelist Ford Madox Ford. Through Ford, Biala became enmeshed with many of the artists forging a new Modernism including the sculptor Constantin Brancusi, the painter Henri Matisse, and writer Gertude Stein. Biala began exhibiting her work in Paris as early as 1938 making her one of the earliest Americans in Paris. Upon Ford’s death in 1939, Biala returned to New York and established herself among a rising generation of artists defining themselves as the New York School.

“Biala chose subject matter over brute expression,” writes Jason Andrew, curator and director of the Estate of Janice Biala, in his essay accompanying the exhibition, “Her paintings derive from the time-honored triumvirate of still-life, landscape, and portraiture, and yet she approached these themes through an uncommon significance defined by a painterliness of gesture, color, and calculated rhythm.”

The exhibition features signature examples of Biala’s unique assimilation the color and compositions defined by the School of Paris with the gestural expressionism associated with Abstract Expressionism. Many works are on view for the first time.

The exhibition is presented in collaboration with the Estate of Janice Biala, New York, and will be accompanied by a fully illustrated catalogue with essay by Jason Andrew available in the catalogue section of our website.