Open by appointment or catch us by chance Tuesday-Thursday 10ish to 3ish! email gallery@thomasmccormick.com to schedule. Or view the show on our exhibitions page.

We have a new catalog on the work of Mary Abbott available on our publications page!

An exhibition of works by Lynne Drexler
Reception: opening reception Saturday, May 1, 6-9pm

Lynne Mapp Drexler was born in Newport News, Virginia in 1928. In the late 1950s, after attending the College of William and Mary in Virginia, she immersed herself in Abstract Expressionism, studying with Hans Hofmann in both his New York and Provincetown schools. From there she went on to graduate study at Hunter College in New York City with Robert Motherwell. In the 1950s that she set her foundation—a synthesis of Post-Impressionist landscape painting and post-war painterly abstraction. The results are something not familiar to most students of the period and her crisp, colorful brushwork allows the artist to sing with a completely original voice. Drexler lived the last 16 years of her life on Monhegan Island with her husband, the painter John Hultberg, she passed away in 1999.

Drexler exhibited extensively throughout her life at venues such as Tanager Gallery, Esther Robles Gallery and Westerly Gallery. She is slated for upcoming shows at the Monhegan Museum and the Portland Museum of Art in Maine. Her work is part of the permanent collections of the Museum of Modern Art, Monhegan Museum, Farnsworth Museum, Brooklyn Museum and the Queens Museum among others. 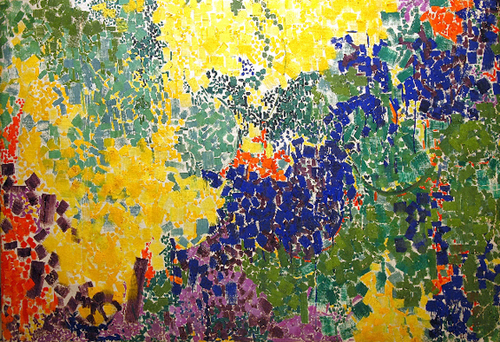