Mary Abbott, at the age of 92, is most readily identified as a member of the ground-breaking Abstract Expressionist movement in New York City in the late 1940s and 1950s. While she was certainly a part of that robust group (and one of the few women invited to join the Artist's Club) a considerable influence on her artistic development came from time spent in the Caribbean Islands. Between 1950 and 1958 she wintered in Haiti and St. Croix, where she is seen in her studio window above, c. 1951. Mary fell in love with both the terrain and the people and on daily hikes and sketching trips she immersed herself in the exotic environs, becoming at times one with the abstract splendor of the tropical jungle and the highland rain forests. These were lessons that informed her work back in the New York studio — lessons that were never forgotten.

This is the first comprehensive look at the paintings, drawings and watercolors, often begun in the islands and finished in her Southampton studio, that became the foundation for Abbott's long and continuing career.

A 48 page, fully illustrated catalog is available in the Publications section 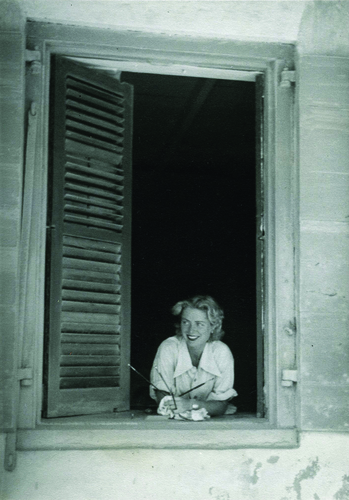